Now the patrons will also have 4 new Phantom miniatures in the adventure phase.

(See Skull Tales in Kickstarter) A dark night and the moon hidden behind some clouds, foreshadowed the arrival of a tropical storm. A ship with dark sails reached the cove, very close to the Jesuit mission of San Martín, home of an indigenous people under the protection of Father Javier.   Men reached Earth among the devil's most peculiar laughter. Only the light of the torches allowed to glimpse their human forms, reassuring Father Javier that those voices did not belong to the evil one. But I couldn't be more wrong.  The next morning there were only ashes left from the mission. All the men had been killed, the abducted children and the clerics hanging from the church tower.   The Indians who survived the humiliation received, lost their sanity and as a single mind, surrendered to the sea under the same prayer to Yemaya to consummate their vengeance in another life, while their cries were heard rumble in every corner of the Caribbean.  And so the legend of the Weepers was born. Ghosts returning from life thanks to the power of Yemaya, and who have sworn revenge of any man come from the sea… Now the patrons will also have 4 new Phantom miniatures in the adventure phase.  "I always thought it was a children's story, but now it was in front of me, suspended in the air, and those empty basins had some kind of fire instead of eyes. My soul trembled only with the vision of that nightmare. " A new kind of enemy comes to your adventures to terrorize your pirates. We added 4 Phantom miniatures along with your enemy card. 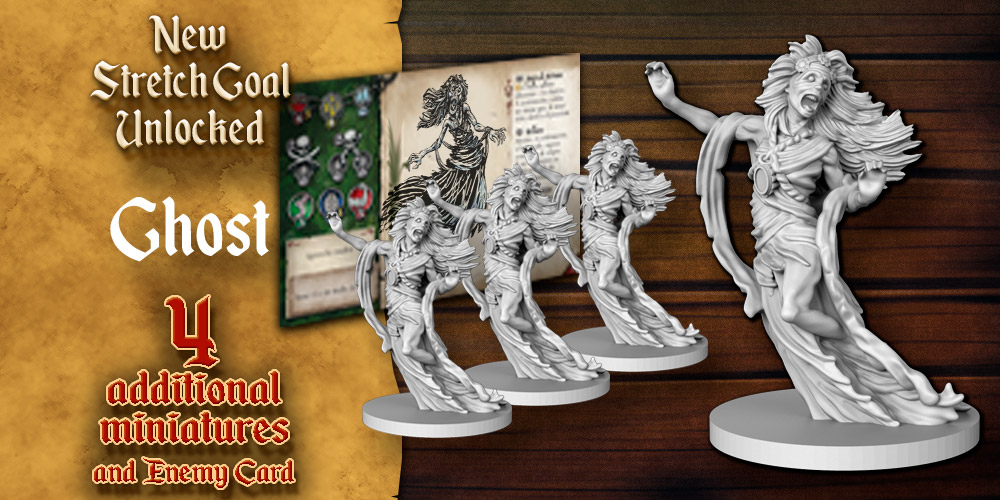