We have been working on the new version 2.0 of Skull Tales for almost a year, improving much of the illustrations of characters and...

Greetings @Marers of Skull Tales, (link from Kickstarter) We have been working on the new version of Skull Tales for almost a year now, "Todo Vela!", Improving much of the illustrations of characters and enemies, layout of the components, designs, but on all the rules. In particular we have increased very much the depth of the rules of the phases of Crossing and Port, that without being complicated, they are almost like independent games: Adventure, Crossing and Port; 3 games in 1! In the Port phase, in addition to adding event cards, among other things, there will be a new board that will allow all the characters to move between the different locations to perform actions: buy / sell, visit the Madame, listen to rumors in the Tavern … To many it will remind you of Monkey Island … And there will also be an optional rule to play film approaches … We have worked with dozens of groups of Skull Tales fans, testing a variety of rules and improving all aspects of the game at the mechanic level, ambience and aesthetics. But the best of all is that those who have the previous version, can get Kickstarter adaptation to version 2.0 for a very special price, for being the first patrons, and also can get the exclusive extras of the new version. We will inform you about the approximate date of the launch. For now we include some images of the new designs and illustrations: I also inform you that the publisher that will be responsible for producing the game will be ECLIPSE EDITORIAL, in collaboration with DRACO IDEAS. Right now, the successful RATLAND campaign on Kickstarter is ending, of which only 2 days remain! Do not miss it! To finish, just today Tuesday October 31, Halloween night, the author of Skull Tales, David Illescas, is the author of the new game that starts in a Crowdfunding campaign in Verkami today: Apocalypse Z. It will only be in Spanish for the moment. Apocalypse Z began as a blog that soon exceeded one million visits, and became the trilogy concerning the zombie theme. Now for the first time, and thanks to David Illescas, we can enjoy it in a table game format and immerse ourselves in its universe feeling the anguish of being chased by zombies, where the important thing is to learn to survive, collaborating with the rest of the players. 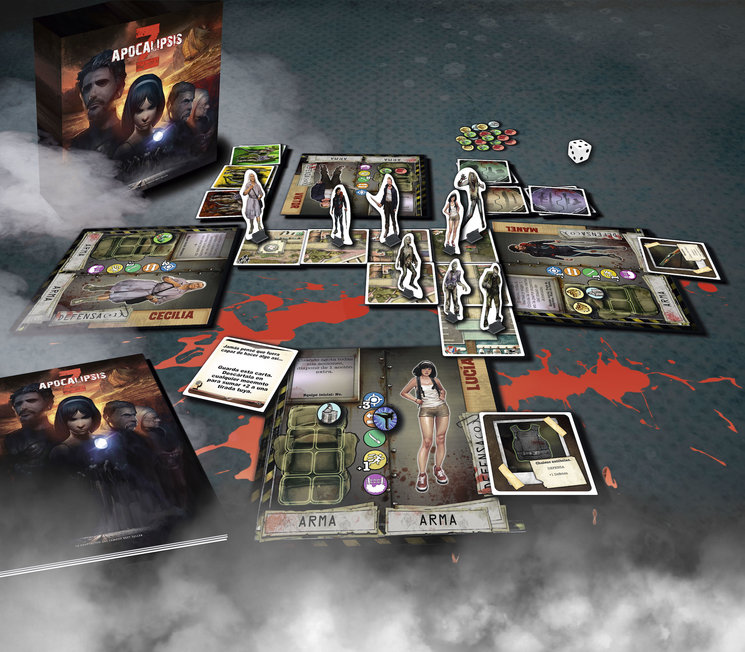